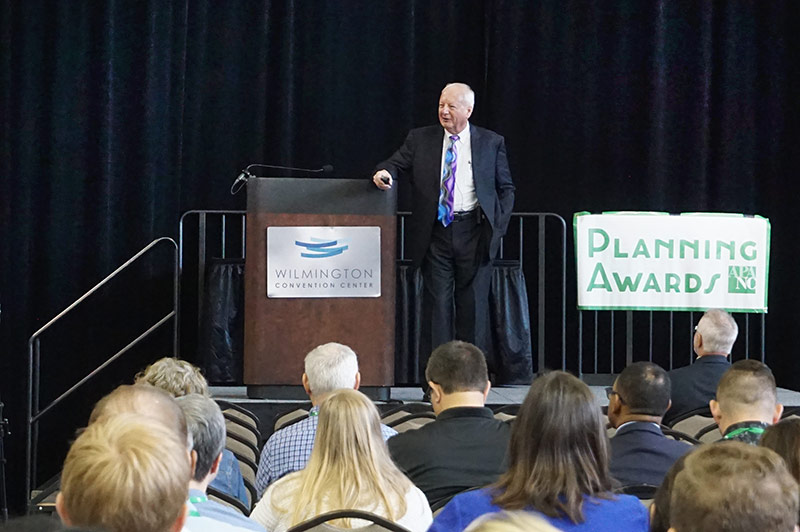 Trained not only as an urban planner, but also as a journalist, Jim Schwab has always seen effective communication as central to the role of an effective planning professional. In addition to an extensive list of publications, Jim has appeared frequently on conference panels, as a keynote speaker, in news media interviews, and in other forums where he has advocated and advanced the role of planning in addressing natural hazards and other environmental and urban issues. He is now available as an independent and highly articulate public speaker for conferences, college lecture series, and many other venues. He is represented in this capacity by Deene Alongi, formerly the Conferences and Meetings Director for APA, who is now engaged independently as a speaker representative. 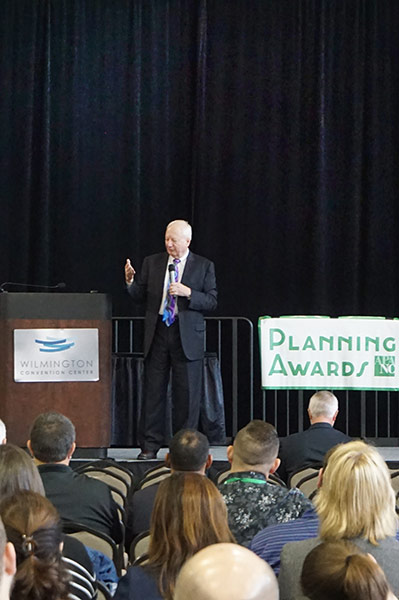 On October 9, 2019, Jim served as the keynote speaker for the American Planning Association’s North Carolina chapter annual conference, at the Wilmington Convention Center, in Wilmington. His topic was “High Winds, High Water, High Resilience.” He discussed the vision of communities adapting successfully to climate change and disaster threats and outlined the evolution of planners’ involvement in these issues over the past 25 years. Nearly 400 people attended the presentation.

None at this time.

“Jim’s work with FEMA since the 1998 Planning for Post-Disaster Recovery and Reconstruction PAS Report culminated in 2010 with Hazard Mitigation: Integrating Best Practices into Planning, the PAS Report issued in May 2010.  During the intervening years between those reports, each major disaster reinforced the lesson that disaster mitigation planning is best and most effectively accomplished when it is integrated with all ongoing community planning.  With such a wide scope, Jim focused this project by convening the “best and brightest” researchers and practitioners in the varied disciplines involved in planning and disaster mitigation in a scoping symposium.  His ability to reach out to creative and resourceful people active in these fields all around the nation was key to the success of the final product, and just as important to helping the planning profession recognize and assume its essential role in the disaster resilience and sustainability of American communities.”